Message from the Vice Chancellor 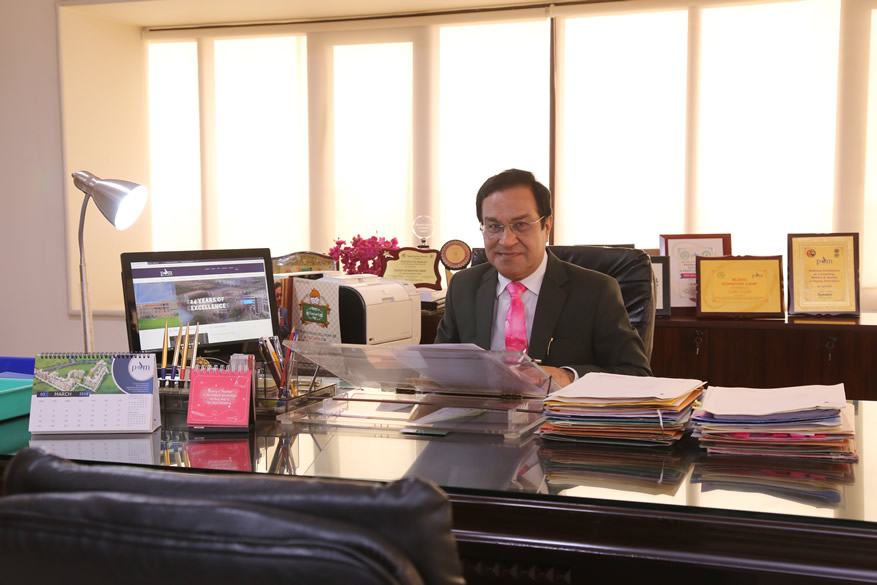 Dear Students,
Hearty welcome to the PDM University , Bahadurgarh, Haryana. P. D. Memorial Religious & Educational Association which was founded in 1995-96 in the memory of Late. Shri Prabhu Dayal Ji, and which has been imparting world class quality education for the last more than 20 years to hundreds of thousands of students through its PDM Group of Institutions has now launched the PDM University with a modern and magnificent campus and excellent facilities.

I really deem it an honor and a rare privilege to be the founder Vice-Chancellor of this University and assure you that this University shall soon become the flagship university of the country known for excellence of its teaching, research and innovation with a focus on all round development of the students. To make this University a world class university, no doubt, one needs time, money, infrastructure, good governance and management but above all, one needs to have the best talent in terms of faculty, students and staff. It will be our endeavor to ensure that the University is able to attract, retain and nurture the best minds and hence fulfill the dreams of our Chancellor and visionary Hon’ble Smt. Bimla Singh Prabhu ji.

The two major activities of any University are to create and disseminate knowledge and our endeavor would be to excel in both of them. The creation of knowledge requires good research and innovation facilities while the dissemination of knowledge requires outstanding faculty and learner centric environment to create fertile minds. Our university is committed to provide students with the best of the faculties, facilities, learning environment, professional experience, practical training and placements in the career you have chosen to pursue with us. The focus of our teachers would be to encourage thinking, innovation and creativity amongst the students. I can say with full confidence that this university will provide the students with ample opportunities to express and present their creativity and talent.

Please remember that at times University life can be challenging. Effective time management and personal discipline will be a major key to your success here. It will be vital to set some clear immediate as well as distant goals and then move ahead with bull dog determination and confidence to achieve these goals. As you are our key stake holders, we also seek your suggestions for the betterment of the University. We assure you that we are there by your side always and we will do our best to meet your aspirations. Once again I welcome all the students who have chosen to be a part of this University. I am sure that you will feel proud on being associated with us and make us equally proud with your academic and professional achievements.

I wish you all the best in your future career as students of this University .

Prof. A.K.Bakhshi is Founder Vice-Chancellor of PDM University, Bahadurgarh, Haryana. He was Executive Director of Tertiary Education Commission (TEC), Mauritius (a post equivalent to that of Chairman, UGC in India) during October 2013 – February 2015. He was selected for this prestigious position through an international selection in 2013. Prior to joining TEC, he has been Vice-Chancellor of U.P. Rajarshi Tandon Open University (UPRTOU), Allahabad for more than two years (2011–13). Prof. Bakhshi held the prestigious  Sir Shankar Lal Chair of Chemistry in the  University of Delhi for more than two decades and was also Head, Department of Chemistry, University of Delhi  during May 2010– August 2011. He has also been a Visiting Professor at GGSIP University, Delhi  during 2007.

Prof Bakhshi is also presently Chairman of National Resource Centre of Chemistry (NRCC) of the MHRD, Guru Angad Dev Teaching – Learning Centre of the MHRD and Centre for e-Learning, all the three centres located at SGTB Khalsa College, University of Delhi. He is one of the leading e-learning experts of India. Prof. Bakhshi has also been Member of the Standing Committee of the National Mission on Education through ICT (NMEICT) of the Govt. of India (2009-2011). He was Chairman of the National Science Digital Library (NSDL) projects of the CSIR in both Chemistry and Polymer Science (2005-2006). He was also the Chairman of the Content Advisory Committee for Chemistry for SAKSHAT portal of the MHRD, Govt. of India which was launched on 30th October 2006 by the then President of India Dr. APJ Abdul Kalam.

Prof. Bakhshi has also been the Director of the Institute of Lifelong Learning (ILLL) as well as of Centre for Professional Development in Higher Education (CPDHE) of University of Delhi during 2008-2010. In his capacity as Director ILLL, he spearheaded the process of e-transformation of the University of Delhi and also introduced many skill based programmes. ILLL under his leadership conducted the first On-line examination in the history of Delhi University in the years 2009 and 2010.

Prof. Bakhshi’s research interests include theoretical polymer chemistry with special reference to electrically conducting polymers and biopolymers. He is the author/coauthor of more than 170 research and education articles etc., and one patent. He has to his credit 11 books as author/co-author, 51 e-Books/Books as editor/chairman/ convener of the working group and 49 e-modules as author/coauthor for PG chemistry courses. Many students (18) have obtained their Ph.D / M.Phil under his guidance. He has had research projects from CSIR, UGC, DAE and DST.

His other interests include innovation in science education, ICT in higher education, e-Learning and MOOCs. He has also been a Member of National Writing Team for Chemistry Class XI and XII books of NCERT (2001-2003).

Prof Bakhshi was felicitated two times (September 2009 and December 2011) for distinctive and outstanding contributions to Education including e-transformation of the University of Delhi by the former President of India Dr. APJ Abdul Kalam.

Prof. Bakhshi was elected as the President of the section of the Chemical Sciences of the Indian Science Congress Association (ISCA) for the year 2011-12. Prof. Bakhshi has been a Member of the editorial boards of the Indian Journal of Chemistry (Section A) (1999-2001) and Journal of Scientific and Industrial Research (1999-2001 and 2007) published by the CSIR and also the Chief-Editor of the UGC-sponsored journal Chemistry Education Review.  He was also co-guest editor of the special issue of the Indian Journal of Chemistry on Conducting Polymers (June 1994).

Prof. Bakhshi is recognised as one of the best teachers of Chemistry in the country.

Prof. Bakhshi has delivered many Talks / Plenary Lectures / Keynote Addresses at various conferences, seminars, universities and colleges both in India and abroad.
He has also Chaired Technical Sessions as well as Panel Discussions at various national/international conferences. He has also been very actively involved in the organization of many conferences, workshops and seminars at the national / international levels. Prof. Bakhshi has also been a Member of various Professional/Academic Bodies/Committees of MHRD, UGC, NAAC, DST, CBSE, NCERT, various universities, colleges etc.

Last but not the least, Prof. Bakhshi has also the distinction of being one of the first persons from the Universities in India to have been selected as the Member Scientist of the “Third Indian Research Expedition to Antarctica” in 1984.